BlackBerry phones will stop working as intended starting next week as confirmed by the company. So starting January 4th, 2022, the device will no longer be able to support legacy services over cellular and Wi-Fi connectivity. 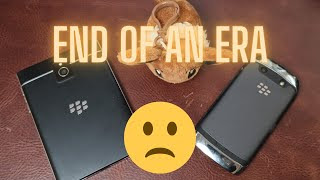 The OS has a lot of its use since it stopped working for social media apps such as WhatsApp, Messenger. The device should have stopped working since September last year when the company made the announcement, however, the company postponed it with “an expression of thanks” to its loyal customers and partners. Take note that the update does not apply to BlackBerry phones running on Android OS, rather only BlackBerry OS.

According to the update note on the companies' website, it stated that from January 4th, devices based on BlackBerry 7.1 OS and earlier, BlackBerry 10 software, BlackBerry PlayBook OS 2.1, and earlier versions, will no longer be able to “reliably function,”

With the BlackBerry phones unable to use cellular or Wi-Fi connectivity, make phone calls send text messages, and even the emergency 911 functionality, it makes the device close to being useless since social media and calling at the major use of smartphones.

This development regarding BlackBerry phones does not mean the brand "BlackBerry" is totally dead. In fact, a Texas-based startup OnwardMobility in 2020 teased to launch a 5G BlackBerry phone in 2021, though it's yet to be unveiled. Furthermore, the company is currently working on developing its security software and services for various enterprises and governments around the world.