Twitter will be implementing a TikTok feature that lets users react to tweets with photos or videos. This 'Quote Tweet with the reaction', allows users to post video reactions to tweets in coexistence with the tweet embedded. 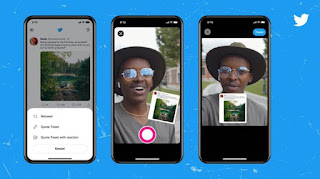 Furthermore, users can tap on the 'Quote tweet with reaction' icon from the Retweet menu to react to a tweet with an image or video. Twitter is calling this new feature Tweet Takes, this feature is quite similar to TikTok's video replies. Currently, this feature is in the beta stage for iOS users.

The Twitter Support team on January 7th, 2022 shared a tweet about this new feature, briefly explaining how the feature works. How does it work? Easy, all you have to do is tap the 'Quote Tweet with reaction' option while retweeting, then add a photo or video. It's that simple. The Twitter official also made a demonstration by posting a reaction quote tweet

However, it seems Twitter won't be giving up anytime soon as they keep adding new features to compete with other social media platforms like TikTok, WhatsApp, and Instagram. In fact, Twitter recently rolled out a TikTok-like Explore tab for users in some parts of the world. This allows users to easily check for top trending content in the platform.

What feature do you think Twitter should implement that will gain a lot of its users' attention? Let us know via the comment box your thoughts.