Google finally updates its Chrome browser logo for the first time since 2014, eight years ago. It was a subtle change from Google, the logo colours red, yellow, and green are now flat. 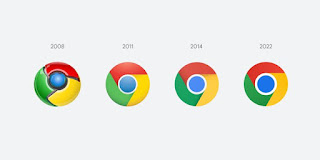 The changes now made the blue circle in the middle seem bigger than usual, the colours in the logo are kind of vivid.

Some of you might have noticed a new icon in Chrome’s Canary update today. Yes! we’re refreshing Chrome’s brand icons for the first time in 8 years. The new icons will start to appear across your devices soon. pic.twitter.com/aaaRRzFLI1

Furthermore, the Chrome logo update will not be exactly the same across all systems. For example, the Chrome OS logo looks more colourful to match the surrounding system icons, while on macOS, the logo has a slight shadow added. The Windows 1o & 11 versions have a system icon matching gradient design.

Currently, the new icon can only be seen by users using the Chrome Canary version of Chrome. The public release will be available to everyone over the next few months.

The beta and developer versions of Chrome now come with new icons, but the major icon update is the blueprint-style icon for the beta app on iOS.