Share
Instagram has added a new Private Story Likes feature, which allows users to like Stories of others on the platform without having to send a direct message (DM). 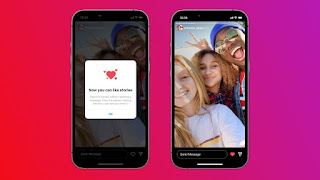 Earlier, users had the option to re-share stories and reply to them via a comment which gets displayed on the users' DM. Now users can simply mark their likes for the stories without having to send them via private message.
See Also: Instagram "Take a Break" Feature Rolling Out to All Countries
This Private Story Like feature was announced by Instagram's head Adam Mosseri on Tuesday via Twitter. The latest update of the app allows users to engage with a Story when they tap the heart icon, a similar icon to the regular feed post.
Furthermore, unlike regular Instagram posts, the Private Story Likes will not show alike count. It will appear in the viewer sheet, and not the private message thread, as confirmed by Mosseri. Last year, he announced that Instagram's focus will be on messaging and transparency improvement, we can see that in works already as they've added support for Private Story Likes.
Notable features added earlier this month include the ability for users to delete posts, Stories, IGTV, comments from the platform in bulk. There is also a filter feature that allows users to sort their contents, past comments, likes, stories, and interactions by date via the "Your Activity" section. So there are lots of features already added and more on the way, stay glued to this site as we follow up with the latest Instagram updates.
PublisherWisdom UchePosted atTuesday, February 15, 2022 Post a Comment
Labels#Instagram, #Tech news