Microsoft's Windows 11 latest update has now gotten more support for Android apps. Together with Amazon, they've integrated Amazon Appstore within Microsoft Store, this enables users to download over 1000 Android apps and games within the store on their Windows 11 PCs. 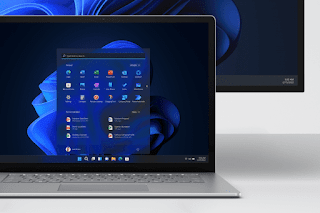 Audible and Kindle are some of the public preview games for Android apps and games that will be available on the latest update of Windows 11, first in the US. Furthermore, the update will also be coming with an improvement on the Operating System's taskbar such as clock and date showing on the taskbar on other connected monitors. The taskbar will also show live weather content in the left-hand corner, and mute/unmute functionality coming to Microsoft Teams customers with work or school accounts.

There are also changes in the Notepad and Media Player apps design as well in the sense that the media player now allows quick browsing due to the newly implemented keyboard shortcuts and access keys. The new Media is a direct replacement for Groove Music, so the Library and playlists of users will be migrated to the new system software automatically.

As for the Notepad app re-design, it will be getting a new interface and will also support dark mode. Users will be able to select make use of new features such as multi-level undo, colorful emojis, and a new find-and-replace experience.

This feature update was announced by Microsoft on Tuesday via a blog post, the blog post mentioned some supported games which are Audible, Kindle, Subway Surfers, Lords Mobile, and Khan Academy Kids. Microsoft also partnered with Intel so they can make use of the Intel Bridge technology for offering a new category of mobile apps and games on Microsoft Windows PCs.

Windows 11 PCs should have at least 8GB of Random-Access Memory (RAM) and a solid-state drive (SSD) rather than a Hard Disk Drive (HDD) in other to efficiently use mobile apps via the Amazon Appstore Preview. Also, the minimum processor specs are  — Intel Core i3 8th Gen, AMD Ryzen 3000, and Qualcomm Snapdragon 8c or above.