Instagram "Take a Break" Feature Rolling Out to All Countries

Instagram's "Take a Break" feature will be rolling out to all countries as announced by the company on Friday. This feature allows users to set up reminders that notify them after they've been scrolling through the app for a certain amount of time. 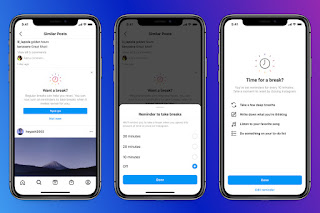 To further emphasize this feature, this will not be a replacement for Instagram's existing Daily Limit feature that allows users to set a limit on the amount of time they want to spend on the app on a daily basis. So users still get to make use of the limit feature alongside the Take a Break feature that is also optional to enable.

Instagram partnered with the youth platform 'We The Young' via a compaign called Break Zaroori Hai mainly to spread awareness about the feature. While this feature reminds users to stop using the app after a while, it is optional, so users can enable or disable it, while having more access to choose how long they want to use the app before they can be reminded - 10-, 20-, or 30-minute intervals.

This is the first time since the feature is getting rolled out to all countries after several months of testing it in the US, Canada, New Zealand, UK, Ireland, Canada, and Australia.

However, while this feature is optional to enable, users who have used the app for a while will be nudged to set up reminders to take more breaks in the future, along with “expert-backed tips to help them reflect and reset”, according to the company. While the Younger audiences will be shown notifications to suggest enabling the Take a Break feature.

According to the Meta-owned company, the new Take a Break feature will roll out to Android users in the coming weeks, it's currently available for iOS users.