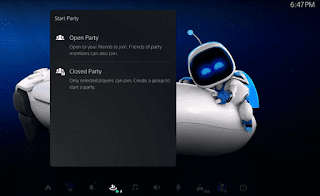 How does the PlayStation Open Party feature work? This allows a player's friends to join a Party without having to use an invite, this also extends to the party member's friends. However, for this feature to work for all users, they need to be on the beta version of the system software. Closed Parties nevertheless will still be available, which requires an invite link.

The new voice commands will also allow users to locate and open games and apps on their system. Currently, gamers in the US and UK have access to test a preview of this feature. Also, media playback will be controllable with voice commands, according to the company. Gamers are able to enable the PS5 Voice Command (Preview) settings by saying "Hey PlayStation" in English.

To get access to this PS5 Beta, head to the company's website and signup, users who get approved will be notified by Sony. In conclusion, Sony made it clear that some beta features on the PlayStation 5 may not be available in the final release of the upgrade after it has been rolled out to all users later this year.