Share
PlayStation 5 is around the corner and Sony has unveiled the new PS5 controller which has new features that are jaw-dropping. It is called 'DualSense' which is a new name from the previously known 'DualShock' controllers. Here are the expected features of this new PS5 'DualSense' controllers. 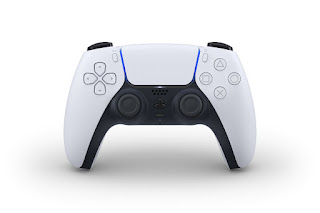 The controller has new haptic feedback which the company says "adds a variety of powerful sensations you'll feel when you play, such as the slow grittiness of driving a car through mud. Immersion has been improved through the L2 and R2 adaptive triggers button, this helps the players feel the realism of the game they are playing and actions performed as well.

The Sony PlayStation 5 Controller design has also changed, looking at the picture you will see it a bit smaller than the originals, also it has a cone-like shape which is good for the grips. But the rechargeable battery is still intact and doesn't need any additional purchase just like how the Xbox Series X made it purchasable.

The DualShock 4 previously had a button that we know as 'Share', it has not been totally removed, rather it got replaced on the DualSense controller with a 'Create' Button. It has more functionality apart from the share feature, but the company didn't reveal many details about it and said as we get closer to the launch the features will be explained.


This can be seen on the array which allows players to easily communicate with friends without the use of Head Phones, also there are no talks if it will pick up the buttons pressed on the controllers or it will not be sensitive to that, but I doubt such walk around to make it hear only audios ain't difficult.

The controller comes with the only black and white colors, obviously, you can still customize it if you need a better color for your YouTube Videos. As for the PS5 Launch date, we are not certain, but it could probably come late November this year, hopefully, the pandemic would be over.