Russian tech developers are currently working on an alternative platform to Google's App Store, plan to launch it on May 9th, which is a national holiday in Russia that celebrates victory in World War Two. 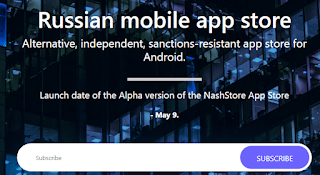 Due to the crisis between Ukraine and Russia in late February, YouTube and Google Play suspended all payment-based services in Russia, including subscriptions.

"Unfortunately, Russians can no longer normally use Google Play to buy apps, and developers have lost their source of income," said Vladimir Zykov, director of projects at Digital Platforms, an organization focused on digital development. "This is why we have created a Russian app shop, NashStore," Zykov added in a statement.

NashStore, the new Russian app shop meaning in English is "OurStore", implying it is a Russian own platform. Also, the statement said that it will serve Android mobile devices and should ultimately be compatible with Russian Mir bank cards

Early March, Google said it had blocked mobile apps connected to RT and Sputnik from its Play store, just after they had removed the Russian state publishers from its news-related features. Russia seemed to have retaliated by blocking news aggregator service Google News in the country this week while accusing it of spreading false information about the conflict.

Not only did Google limit its services from Russia, but other tech companies have also done the same over the past months.