Assassin's Creed Mirage has been announced and confirmed to be launched sometime in 2023 on all major platforms - Playstation, Xbox, and PC. The game trailer has been revealed, featuring the lead character Basim Ibn Ish'aq. 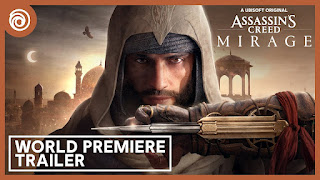 Ubisoft released a new cinematic trailer for Assassin's Creed Mirage a while ago, this can be watched on YouTube - watch the embedded video below. The cinematic trailer shows master Roshan conducting a ceremony. Ubisoft will be going back to the series roots which features a tight-bound narrative experience - focused on stealth, parkour, and assassinations.

Furthermore, the game is set 20 years before the events of Assassin's Creed: Valhalla. So Mirage follows a younger Basim as he turns his life around from pickpocketing locals in Baghdad to becoming a skilled assassin.

“Are you ready to leave your life behind and walk the path of shadows?” asks Roshan, as we cut to footage of a young Basim getting chased by townsfolk over a matter of robbery. Despite being quite adept at parkour, he gets cornered at one point, only to get saved by a mysterious hooded assassin — the aforementioned Roshan. Basim is on a path to correct his errors and join a new family to hone his skills and eliminate targets that threaten to overthrow Baghdad's peacefulness.

The Assassin's Creed Mirage trailer also shows some new gameplay features such as the Red smoke bombs being part of the inventory and the drone bird which allows the player to survey the surroundings. The conclusion of the trailer features a monster known as - Draugrs, seen in the God of War (2018) game.

Pre-orders for Assassin's Creed Mirage are on, and as indicated earlier, the game will be released in 2023 on PC, PS4, PS5, Amazon Luna, Xbox One, and Xbox Series S/X.