God of War Ragnarök releasing on November 9th, 2022 exclusively on the PS4 and PS5 finally gets a story trailer today that hints at what the storyline is all about and also provided some gameplays. 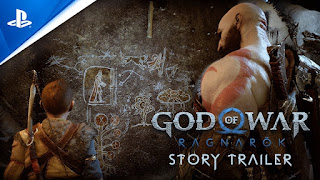 The God of War Ragnarök trailer which has been provided below shows Atreus is keeping some secrets from his father Kratos. Kratos journeys through Fimbulwinter and makes contact with Týr, son of Odin who recognizes Kratos.

Kratos, his Son Atreus, and Týr journey into an undisclosed realm housing a tenacious foe that seems to be the key piece to a puzzle — as evidenced by Týr dragging it along a lighted pathway.

The trailer further portrays Kratos guiding his son while Kratos struggles to overcome his past but find it difficult as Valkyries keeps calling him a Pretender God, and Tyr saying “All that blood on your hands, on your son's hands,” emphazing Kratos past actions has consequence.

As for the gameplay, it shows Kratos leaping across large gaps, using the Blades of Chaos as a grappling hook/ anchor which helps him when it comes to double jumps. Kratos is now able to infuse his armaments with fire or ice elemental attacks being very effective and causing more damage to hordes of enemies.

The God of War Ragnarök trailer also teases a fight between Thor, the God of Thunder, and Kratos, the God of War in a hope of resolving past disputes. There was also a brief tease to Sköll and Hati which are giant wolves known for chasing after the Sun and Moon, causing a tear in the heavens.

God of War Ragnarök's release date is set for November 9, and will only be available on the PS4 and PS5. The prices for the Playstation 4 version and Playstation 5 version are $50.33 and $62.91 respectively.