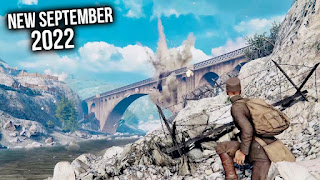 Henceforth, we will be reviewing the top 10 new games of the month featuring different genres like Action, sports, arcade, RPG, FPS, e.t.c for other supported devices as mentioned above such as Android, iOS, Consoles like Sony Playstation, and Microsoft Xbox.
See Also: Best Fun Games to Train Your Mind in 2022
This month September 2022 upcoming games are top-notch and interesting such as Steelrising. We have not only reviewed the games but also made their gameplay/trailers available for your viewing convenience.

The list of best new games of September 2022 is all confirmed to be released this month. Better games might be available, but not mentioned on the top 10 best games for PC PS4 XBOX ONE PS5 XSX|S Switch, however, feel free to let me know via the comment section after this post.
See Also: Best 5 Offline Multiplayer Games for Android using Wifi Hotspot

Steelrising game is set in Paris, in the year 1789 in which the French Revolution was hijacked with bloodshed by Louis XVI and his merciless mechanical army. It is now up to you, playing as Aegis, a mysterious automaton masterpiece, to stop Louis XVI and his army from causing further harm.
This action-RPG game developed by Nacon and BIGBEN INTERACTIVE will be launched on the 8th of September, 2022. It will be available on PlayStation 5, Xbox Series X and Series S, and Microsoft Windows.

Return to Monkey Island is one of the best upcoming September new games 2022. This game has been developed by Ron Gilbert's Terrible Toybox, a series creator of legendary adventure games, in collaboration with Lucasfilm Games. If you loved Oxenfree, a game developed by Telltales games, then surely you will enjoy this as well.
This point-and-click adventure game was published by Devolver Digital, it will be available to play on Nintendo Switch, macOS, and Microsoft Windows after its release on 19th, September 2022.

As expected, a first-person shooter game had to be among the list of new games for September 2022. Isonzo is a game that is set in WW1, this FPS game lets you battle among the scenic peaks, rugged valleys, and idyllic towns of northern Italy.
The game will be released on 13th September 2022, it will be available to play on PlayStation 4, Xbox One, Microsoft Windows, Xbox Series X and Series S, and PlayStation 5. The game also supports a Multiplayer mode.

Soulstice is set in a dark world brimming with hidden mysteries - you get to master great combating habits the dual forces of two sisters in a coming-of-age dark fantasy story with fast-paced action combos, and most importantly. This is a fast-paced action game, there are strong enemies and boss fights intact while playing.
Soulstice is set to be released on 20 September 2022 on various platforms which include Microsoft Windows, Xbox Series X, Series S, and PlayStation 5.

This is an upcoming new game for September 2022, it is a third-person shooter game developed and published by Nintendo, playable only on the Nintendo Switch console. The game also supports multiplayer mode, allowing up to 8 players for both local and online multiplayer.
The game is set in a sun-scorched desert inhabited by battle-hardened Inklings and Octolings. As the player, your aim is to ink, dive, swim, and splat your way to the top! Splatoon 3, as said earlier, will be available only on the Nintendo Switch console.

The DioField Chronicle game, among the best new games for September 2022 is an RPG game that features a real-time battle system, strategic gameplay, and real-time tactical battle.
It was co-developed by Square Enix and Lancarse, and it is set to be released in September 2022 for the Nintendo Switch, PlayStation 4, PlayStation 5, Xbox One, Xbox Series X/S, and Windows platforms.

Here is a game quite similar to Dissidia Final Fantasy game, Valkyrie Elysium which is based on a fiction story where the All-Father Odin, with the last of his strength, created an emissary of redemption to help stop the Ragnarok occurring upon the realms as a means of salvation to the people and world.
The game will be released on 29th September 2022, and it is playable on PlayStation 4, PlayStation 5, and Microsoft Windows.

9. No Place For Bravery

No Place For Bravery gives you the opportunity to seek Thorn's (the MVP's) daughter who got missing in a world filled with violence due to wars. The player's aim is to survive brutal clashes in this 2D top-down action RPG and discover the bone-chilling tale of Thorn's crusade to make his family whole again.
The game will be released on 22nd September 2022 for Nintendo Switch, and Microsoft Windows only. This is a multi-genre game featuring RPG, Action, Indie, and Adventure.

On our final list of top 10 new games for September 2022 comes Hellsinger, a rhythm FPS game which means, that what you do in the game will rhythm with the background song playing during your gameplay. As the player, you get to fight several types of demons through several levels with your astonishing and upgradeable weapons.
What's more fun, the more you sync your action with the background rhythm, the more intense the in-game background music becomes and this increases the damage caused to enemies. The game will be available to play on Microsoft Windows, Xbox Series X and Series S, PlayStation 5

Honorable Mentions [To be Released this Month]:

See Also: eFootball 2023 Finally Launched
Well, these are the top 10 new games for September 2022, so as a console or PC owner, you have lots of games to get excited for. They will be available for ordering officially on their release date. Stay tuned monthly for upcoming game reviews. Don't worry, we will have new posts for each month, this post will remain as it is.
PublisherWisdom UchePosted atThursday, September 01, 2022 Post a Comment
Labels#Games, #Top list