YouTube recently increased the number and frequency of non-skippable ads played before a video can be watched up to 10 in a row as reported by many users on Reddit, Twitter, and other social platforms. Google also confirmed this by saying they have concluded their experiment with advertisement. 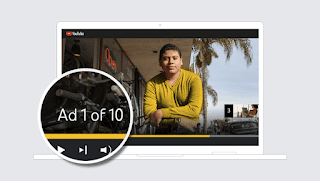 Google responded on Twitter after users complained on Reddit and Twitter that they were being faced with up to 10 unskippable ads before a video could be watched, Google said that the sudden increase of non-skippable ads were just "bumper ads" which last for just 6 seconds.

However, as reported by 9to5Google, a YouTube spokesperson confirmed that such an ad has concluded since it was just an advertisement experiment.

The report further quotes a YouTube spokesperson as saying "at YouTube, we're focused on helping brands connect with audiences around the world, and we're always testing new ways to surface ads that enhance the viewer experience. We ran a small experiment globally that served multiple ads in an ad pod when viewers watched longer videos on connected TVs. The goal is to build a better experience for viewers by reducing ad breaks. We have concluded this small experiment."

Well, this new development, if implemented can cause lots of issues in users' adaption and users who want to watch a quick video for specific information. YouTube however provides a YouTube Premium subscription that removes ads from videos legally. New subscribers can also get a 30-day free trial. As a PC user, there are several free Google Chrome extensions that can be used to bypass such ads.