Share
Finally, the Samsung Galaxy S9 & S9+ is Receiving it's March Software Update. Not long ago, we saw the Android 8 Oreo update on both devices. 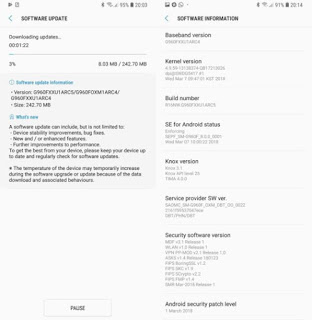 The Galaxy S9 & S9 Plus software update brings new fixes like bugs, it also boosts the phone speed, stability and it's performance have been improved.

The software update size is 243MB as seen in the pic above. The build number G960FXXU1ARC5 and G965FXXU1ARC5 are for the S9 and S9+ respectively.

Nevertheless, the update is currently available only in Germany and other countries are expected to receive their March update soon.

The update fixes nine (9) severe Android vulnerabilities and five which affects the device software. To update, Go to settings > About > Software > Update.