Share
Red Dead Redemption 2 PC Requirements and compatibility have been revealed by Rockstar Games ahead of the game's release. The game recommends an Nvidia GeForce GTX 1060, and it is offered to support 4K HDR and widescreen resolutions. 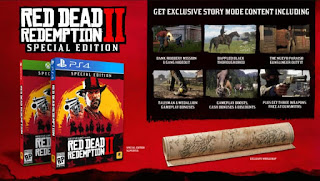 A few days ago, we got to know the game will be released for PC on November 5, while pre-order has already begun. This game will be one of the best for PC users, it can be played offline and it has very Good graphics, now we have the Requirements, let's know more about it.

In addition, the full PC requirements of RDR2 for PC has been revealed on Rockstar Games website on Wednesday and they said, players should expect "higher-quality global illumination and ambient occlusion for improved day and night lighting; higher quality snow trails, improved reflections and deeper, higher resolution shadows at all distances; tessellated tree textures, and improved grass and fur textures for added realism in every plant and animal.".

Minimum Requirements of RDR2 for PC


These Minimum Specs means that any computer with lower specs compared to this cannot enjoy this game, or the game will be unplayable. Since this is the minimum specs, players should not expect the best of qualities.

As you can see, 4GB RAM PC sadly cannot play this game, that is the popular RAM majority still uses since 8GB is too expensive. This doesn't mean you cannot play the game, some tweak on your PC graphics should do the work.

If your computer matches the below specifications, hurray, you are going to see the best of this game with smooth gameplay and clear picture mode. Not all can afford 12GB RAM, but it is recommended for perfect gameplay.
Here is Red Dead Redemption 2 Game for PC new Story Mode content and what you should expect:

[4]. New Weapons for Story Mode including:

[5]. New Horses for Story Mode including: