Share
Motorola's first foldable phone Razr 2019 is expected to launch at the November 13 event later this month in Los Angeles. Before then, the Motorola Razr 2019 has leaked severally as the launch date draws ever closer! This time, the Motorola Razr 2019 leaked showing off clear photos in different angles of how the smartphone functions and its design - Here's what you should be expecting about this Foldable Phone. 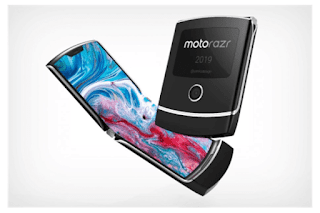 The Motorola Razr 2019 can be folded vertically, almost looks like a flip-like smartphone, it also has two screens, one is placed on the fold while the other, inside the fold.


The leaked photos are reliable because it came from a trusted source - Evan Blass, and also another Dutch site Mobielkopen. Looking at the picture on this post at the right, you will see the Razr 2019 Foldable Smartphone is capable of showing notifications, sound icon - in addition, it can display email alerts, Videos, messages and lots more.

The phone comes in Red and Black finishes, and looking at the screen when folded, it comes with a camera sensor below the small screen for selfies. The smartphone can be used as a normal touch-screen device, and it features a rear fingerprint scanner and a rear screen.

Motorola invitations for the launch event have begun, there, the Razr 2019 Foldable Smartphone will be launched and confirmed specification will be revealed.
PublisherWisdom UcheDate & Time11/02/2019 06:04:00 AMcomments Post a Comment
Tags#Latest Phones and Gadgets, #Motorola, #Phone Specs, #Razr 2019