How To Enable WhatsApp Fingerprint Lock Feature on Android 2019

Share
Months After iPhone had this WhatsApp Fingerprint feature, Android users got the chance to use this recently. iPhone has been enjoying both the Touch ID and Face ID feature since February, but with this feature now on Android, you can now have the app lock automatically and then unlock with just your fingerprint. 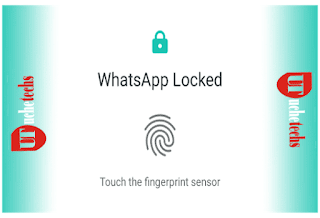 Using WhatsApp Fingerprint Lock Feature on Android, you do not need to rely on any external source or application for fingerprint lock, now it has been embedded on the official WhatsApp application. This feature will only work on Android phones with FingerPrint Sensors, i.e new generation smartphones.


Exactly like how the Touch ID (Fingerprint) feature is enabled for the iPhone users (iOS), WhatsApp for Android users can lock the app using their fingerprints as authentication, and also unlock the device whenever they want. When the App lock, i.e screen time out is reached, WhatsApp will lock as specified how many minutes needed to fully lock. If your device is in the public, you can set WhatsApp not to show the preview of your message in the notifications, not even the message sender.


See Also: How To Get WhatsApp Splash Screen Feature on Your Android Device

How To Enable WhatsApp Fingerprint Lock For Android


WhatsApp provided a screenshot of where this feature is located and how to easily access them, I will put you through that as well, so to access WhatsApp Fingerprint Lock Feature;

6. Now you will see the newly added feature - Fingerprint lock.

This feature is not yet available for all Android users, but it will be available soon for all across the globe. In addition, after enabling this feature, you will be asked to confirm it before it is enabled.

WhatsApp for iOS got a new feature like I mentioned which is Face ID, this unlocks their device when WhatsApp biometric authentication detects their face, after all, iPhone devices have good camera quality.