Twitter: Why you Should Update App to the Latest Version

Share
Twitter opened up recently to advised its users what action to take due to the recently discovered vulnerability on its service. Twitter confirmed it fixed an issue that could have compromised accounts. Here is what they had to say about this.

"Prior to the fix, through a complicated process involving the insertion of malicious code into restricted storage areas of the Twitter app, it may have been possible for a bad actor to access information (Direct Messages, protected Tweets, location information) from the app," Twitter said in a statement. Users should update their Twitter for Android app via Google Play.

We recently fixed a vulnerability within our Android app. To keep your account safe, please update your app as soon as possible. The update is available here: https://t.co/ImcsssBt9b
— Twitter Support (@TwitterSupport) December 20, 2019


We recently fixed a vulnerability within our Android app. To keep your account safe, please update your app as soon as possible. The update is available here: https://t.co/ImcsssBt9b 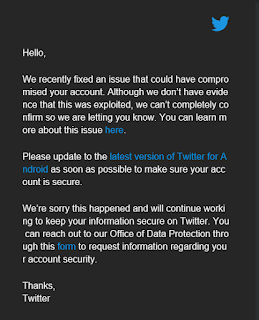 The company wasn't sure if malicious code was embedded into the app through the flaw on their app, but it can't be completely sure it wasn't, but they advised you update your app to the latest version on Google Play or App Store which is more secure than the previous version.


Read Also: Why Twitter's Tweeting via SMS was Turned Off?

"We have taken steps to fix this issue and are directly notifying people who could have been exposed to this vulnerability either through the Twitter app or by email with specific instructions to keep them safe".

Twitter recommended updating to the latest version for Android as the issue did not impact "Twitter for iOS".

"We're sorry this happened and will continue working to keep your information secure on Twitter," said the company in the email sent to the Indian users.