Share
The Samsung Galaxy S9 and Galaxy S9+ phones are now receiving the latest Android 10 Updates, It seems like it is about time these powerful gadgets get a powerful OS version update. Now only does the Galaxy S9 and S9+ get the update, they also get January 2020 Android security patch, more to that, read on. 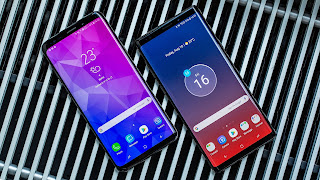 SamMobile confirms the Samsung Galaxy S9 & Galaxy S9+ Android 10 update is available for beta users, but some on Twitter say they got the public rollout in India, so you might be getting it too.

To update your phone to the latest version, make sure it is not rooted, if it is not, head to Settings > Software update > Download Updates.

All Android 10 Features will be available on your device after you download and install it via OTA Update. Make sure to charge your device 100 percent before attempting an update, the interrupted update will permanently damage your device.
PublisherWisdom UchePosted atFriday, January 31, 2020 Post a Comment
Labels#samsung, #Samsung Galaxy S9