Share
Samsung Galaxy M31 teasers are now online just before the official launch, the device leaked specifications shows the Galaxy M31 will come with a large 6,0o0mAh battery just like the M30s. The phone sport a 6.4-inch display with a waterdrop-style notch, an Exynos 9611 SoC and has been teased to sport a 64-megapixel rear main camera. The leaked specifications are out! 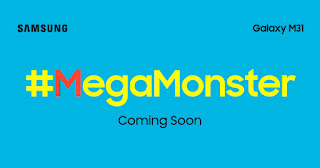 The Galaxy M31 is quite similar to the M30s, just that it has an improved camera from 48MP to 64MP and a higher OS version. The full specs have been leaked by 91Mobiles, they shared the Android version, it is expected to come in Android 10, One UI 2.0 and will support dual-SIM slots. As for the display, it features a 6.4-inch Super AMOLED Infinity-U display and be powered by the Exynos 9611 SoC paired with up to 6GB RAM.

Samsung Galaxy M31 comes in two variant 4GB + 64GB and 6GB + 128GB, while the cameras feature an L-shaped quad-camera setup with a 64-megapixel Samsung GW1 main sensor. It will also feature a depth sensor, an ultra-wide-angle sensor, and a macro lens at the back. Currently, the report hasn't revealed the rear camera setup.


While the teasers have surfaced online, there's no official word about the launch of the phone.
PublisherWisdom UchePosted atFriday, February 07, 2020 Post a Comment
Labels#samsung, #Samsung Galaxy M31