Share
The Samsung Galaxy Z Flip which has been leaked several online has more highlighted features. The phone's outer display is called "Focus Display" and when it has been unfolded, it has an aspect ratio of 22:9. The Galaxy Z Flip features 12W fast wireless charging and stereo speakers. More key features were also shared, read on! 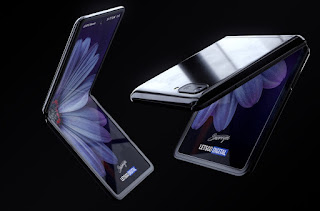 The Smartphone will have a 1.05-inch Super AMOLED display which Samsung calls ‘Focus Display.' The internal display is 6.7 inches in size, it also features a Full-HD+ resolution and the wired charging is said to be fast, as for the capacity, it is 3,300mAh capacity, the phone battery was split into two modules - 925mAh and 2,375mAh.

The Samsung Galaxy Z Flip will come in a Mirror Black and Purple trims, the latter shade having a prismatic effect. The report also states Samsung will not only focus on the Galaxy Z Flip and Galaxy Fold 2 but also focus its efforts on new flagships and more foldable devices.