The Samsung Galaxy S20 Models have now started receiving the latest Samsung One UI 3.0 and also Android version 11 via Verizon. This update wull be rolling out first to users in the US before it expands to other regions in the coming weeks. The Galaxy S20 series is the first Samsung device to receive One UI 3.0 stable update after two months of testing. Here is what you should know about the update! and check if your phone will receive this update. 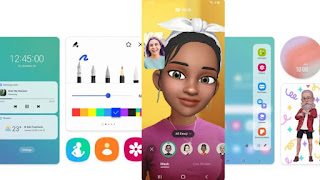 This stable update of One UI 3.0 and Android 11 on the Samsung Galaxy S20 5G model wasn't the only update, it also came with the November 2020 Android security patch. The software version receiving the update is RP1A.200720.012.G981VSQU1ZTHK, other Samsung eligible devices will receive this update soon, this can be seen from the below released schedule of Samsung devices to receive One UI 3.0 and Android 11 based update.

Incase you are not familiar with the One UI 3.0 features and that of Android 11, here are what you should be expecting - now you can double tap your screen to turn it off, also the One UI 3.0 comes with more Camera filters and Single Takes improvements, the lock screen now have more features and it has been enhanced, you now have a cool Quick Panel which comes with media control accessibililty, and most importantly, the notification bubbles which allows you to pin chats on the top of your screen, and lots more.

If you have Samsung Galaxy S20 model device, you can simply check for updates via:- Settings > System updates > Check for system updates > Download now > Install update to check for the availability of the update. Not all Samsung devices will get this update, but here is an overview of devices to get this update below with their schedule;

Kindly note that this scedule is for the Egypt region, it was what Samsung released, so other regions schdule for the update could be slightly different or majorly different. Also this list doesn't seem to be complete yet, so you can contact your local Samsung customer representative to know if your smartphone will get the One UI 3.0 and Android 11 OS update.