PUBG: New State app gameplay and description are currently out, we have reviewed just some information about the game, but when it is out for download, then we will provide a full review of the game with its working direct download links for the APK + OBB and Data files as well. The game is expected to have a total of different controls, gameplay, weapons, and graphics compared to PUBG Mobile.

It is an official game from the same company that runs PUBG, so don't be surprised when you check the Playstore publisher name, which shows Krafton, a South Korean video game holding company. PUBG Studio already shared a trailer of the gameplay. there is even a dedicated website for the game where they share updates, just as Call of Duty Mobile dedicated website. There are also dedicated social media handlers for the game on twitter, facebook, and the likes. 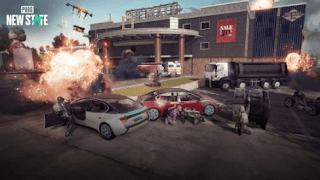 Looking at the application description on Google Play Store, you can see it is giving to give more support to older Android versions, it will support Android 5.1.1 and up. This battle royale game will be one of the best, it could easily surpass other similar games if it turns out to be as planned, unlike the over-hyped FAU-G which was 80% below expectations.