Twitter - an American micro-blogging and social networking service has suspended its verification program, they said they need to work on the application and review the process that allows people to get the verified blue checkmark on the app. 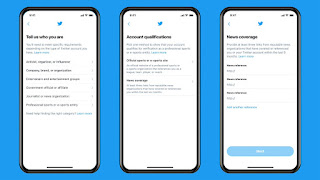 As The Verge confirmed, Twitter will not be letting new account holders apply for blue check-mark verification, this new development is coming just weeks after Twitter mistakenly verified numerous fake accounts that are suspected to be part of a botnet.

It is noteworthy that this is not the first time Twitter has paused its verification program, this happened in 2017 after they received backlash for verifying someone causing controversial discussions.

In 2021, an updated and better version of the verification program, but it got paused a week later after an avalanche of requests.

What's the point of the verification badge? Twitter said that the purpose of the badge is to show that an account is "authentic, notable, and active". This may be true most of the time, sometimes it doesn't work as intended as notable people get their applications rejected, while obviously fake accounts are able to bypass the security checks and get approved.