Google Chrome 95 update is now available for Mobile and PC users, coming with a number of fixes and improvements such as a more secure payment authentication and the ability to save tab groups. Let's go through some of the important features of the Chrome 95 latest release. 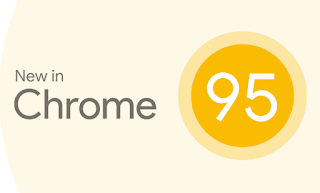 This update was announced by Google on their official blog, they confirmed the new payment extension called WebAuthn - this allows banks to create a PublicKeyCredential that can be queried by a businessperson engaged in retail trade origin as part of an online checkout through the Payment Request API using the 'secure-payment-confirmation' payment method.

Google also added, “Strong authentication with the user's bank is becoming a requirement for online payments in many regions, including the European Union."

As stated earlier, Chrome 95 update allows users to save tab groups, so this means you can simply open multiple tabs at a later date. Head to chrome://flags/#tab-groups-save to locate it. The update also allows Web apps to register themselves as handlers of custom URLs so they can act more like native apps bringing a better experience for end-users.

EyeDropper API main objective is to allow users to select a color from an image, such feature found on advanced photo editor apps or some Chrome extensions. This feature will be very useful to app and web developers looking for a specific code.