The Galaxy A04s specifications have been leaked online, and the specs available to the public include the camera setup, RAM/ROM, display, battery, OS version, e.t.c. Here are the leaked key specifications of Samsung Galaxy A04s in 2022. 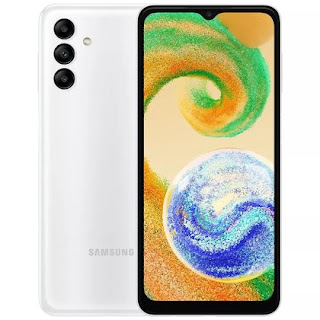 According to a report by WinFuture, the supposed renders of the Samsung Galaxy A04s have been leaked online. The report suggests some specifications of the device. The earlier report suggests the device coming with the leaked specs will carry the model number SM-A047F, and it is expected to be launched soon.

From the leaks, the Galaxy A04s is expected to come with a triple rear camera setup and an LED flash, while the Samsung brand logo can be located at the bottom center of the rear panel which will get a 50-megapixel and a 2-megapixel camera. The device is expected to have its power button on the right spine, with the volume rockers feature.

Still, on the outermost part of the device, it was suggested it could get a SIM tray, and a side-mounted fingerprint scanner and appear in three different color options which are Black, Dark, Green, and White. The front display houses a water-drop style notch front camera of 5-megapixel. The display will be a 6.5-inch LCD display, and as mentioned earlier, comes with a 90Hz refresh rate

Regarding the Samsung Galaxy A04s memory, processors, and other hardware accessories; the device is expected to come with LTE/4G, to be powered by an Exynos 850 SoC - coming with 32GB internal memory, and 3GB of RAM. The phone will also feature Android 12 from the box, having access to Samsung's two years OS upgrade, leaving it with the possibility of supporting Android 13 & 14.

The Galaxy A04s battery will pack a 5,000mAh battery with 15W charging support, and is chargeable with a USB Type-C port. One notable feature is that it comes with a 3.5mm audio jack knowing recent devices lack such.