Samsung's upcoming flagship phone - Galaxy S23 Ultra is expected to feature a 200-megapixel camera compared to the 108 MP Camera of its predecessor Galaxy S22 Ultra. Here is the review of the camera and upcoming features. 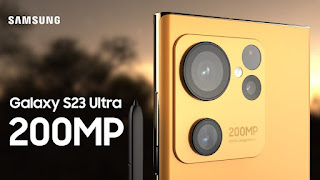 According to a report by Korea IT News, we know that Samsung is expected to feature a 200MP camera on one of the S23 series smartphones. We also expect the Galaxy S23 Ultra to sport Qualcomm's 3D Sonic Max fingerprint scanning technology.

The report further adds that only Samsung Electro-Mechanics and Samsung Electronics are producing 200-megapixel cameras. There are expectations that the list will increase as the sensors start supporting similar-specs low-end devices.

Qualcomm's 3D Sonic Max fingerprint scanning technology coming with the Galaxy 23 Ultra is said to also be featured on other mobile device brands such as the Vivo X80 Pro and the iQoo 9 Pro. This comes with improvements in regards to the area of the screen that accepts fingerprints and is more accurate for efficiency.

The Phone will obviously support 5G as its predecessors, besides we now see budget-friendly Samsung devices with 5G supports such as the recently launched Samsung Galaxy A23 5G. The full specifications and key details have been reviewed on this site, feel free to check it out.