Samsung Galaxy A23 5G has been launched today, there were no formal announcements regarding the launch of the device, it was done silently by being listed on the company's official website. The specifications and images are now available, check out what this brand new smartphone has to offer. 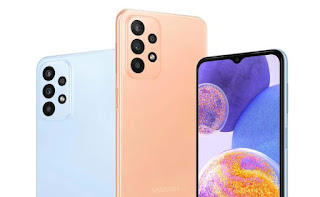 The Galaxy A23 5G features a 6.6-inch Infinity-V display with a full-HD+ resolution, it runs on Android 12-based One UI 4.1, powered by an octa-core SoC, while it packs a 5,000mAh battery. It features 4GB, 6GB, and 8GB RAM options, the internal memory comes in 64GB and 128GB, and the external memory can be expanded up to 1TB.

As for the device pricing and availability, the South Korean company is yet to announce it. However, we can be expecting the price to be around the same price as the Galaxy A22 released last year. In addition, Samsung shared an image of the Galaxy A23 5G coming in the color - Pink, Blue, White, and Black.

In summary the Samsung Galaxy A23 5G camera & other accessories - device sports a quad rear camera setup with a 50MP sensor, 5MP ultra-wide angle lens, 2MP macro lens, and 2MP depth sensor. While the front camera features an 8MP with f/2.2 aperture. As for other features, it comes with dual-band Wi-Fi and Bluetooth v5.1 support, a fingerprint scanner, a gyro sensor, an accelerometer, and a Geomagnetic sensor.