Once again, WhatsApp is working on a privacy-focused feature, this time it is an option that gives group admins more power and control over their group chats. They will soon be able to decide which members can join their group chat or not.

This new feature was spotted on WhatsApp for Android beta v2.22.18.9, which is currently available on the Google Playstore Beta programme. This new feature will most likely reduce spam messages from known contacts or individuals, and ensure only targetted audiences are allowed in.

This update was reported by WABetaInfo, in which they said that group admins will decide which members that can join their group chat. The feature can be accessed from WhatsApp group settings, they can make use of the "Approve new participants" option. 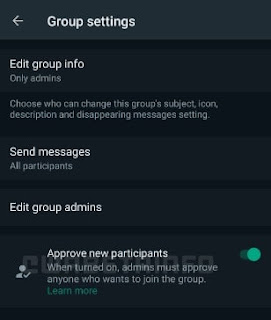 From the screenshot seen above, we have an idea of what the feature will look like when it starts rolling out to all users. Looking at the picture, we can see the Approve new participants option is right under the group settings menu, at the bottom of the edit group admins option in WhatsApp group info.

Read Also: WhatsApp to Soon Allow Group Admins to Delete Messages for All

There seems not to be an area showing the list of all current requests of users who want to join, but there is a chance this will be available on the final release of this feature to the public. So until then, this is what users should be expecting coming to WhatsApp for Android very soon.