Snapchat for Web is a web version of the Snapchat app that allows users to chat, make use of reactions, and more over their web browser. It is currently rolling out to all users, and it now supports chat reactions and lenses. 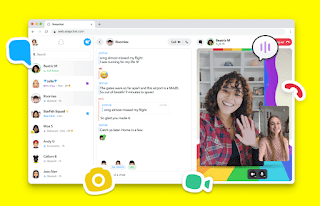 Snapchat for Web has been available for paid subscribers in the United States, United Kingdom, Australia, New Zealand, and Canada for a while now. So after a long wait for other regions, it is now rolling out to everyone around the world.

Snapchat for Web will be coming to all users with new features like the Chat Reactions and Chat reply, alongside the Lens feature. By using the web version of Snapchat, you can also connect with family and friends easily on your desktop.

Snapchat for Web can be accessed by visiting Snapchat.com, users will have to log in or signup for an account via a web browser like Chrome, or Edge.

In other news, late last month, the Snapchat Dual Camera feature was also introduced which allows Snapchatters to capture two perspectives at the same time. This way, they can simultaneously use their front and rear camera to capture photos and videos.