Share
Another awesome smartphone just got Launched and this time, it's a budget-friendly phone with Triple Rear Camera at the back. Samsung Galaxy A70s comes with 64 MP Camera, it also features 6GB RAM and surprisingly, it can be afforded by few because it's more than N100,000 in price. 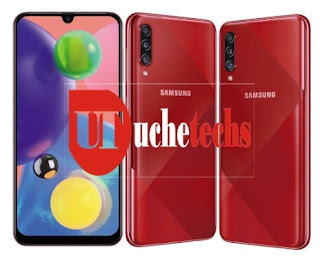 This is Samsung first smartphone with a 64-megapixel primary camera which also has a triple rear camera setup. The phone includes octa-core Qualcomm Snapdragon 675 SoC, a waterdrop-style notch and the battery capacity is 4,500mAh battery.


The Samsung Galaxy A70s is already on sale in India both for major e-retailers and offline stores. The phone is an upgraded version of the A70 phone, but this smartphone comes in two variant.

In Addition, the smartphone can also be purchased from Samsung Opera House and Samsung online store, while Vodafone (Doesn't apply to Nigerians) subscribers can get Rs. 75 cashback recharge of Rs. 255 through MyVodafone app.

Speaking of the octa-core Qualcomm features, it is powered by Snapdragon 675 SoC, while the battery is 4,500mAh as said earlier, but it supports 25W fast charging with USB Type C.


The Galaxy A70s updates from the A70 by featuring Triple Camera setup -  64-megapixel f/1.8 primary camera with night mode, 8-megapixel ultra-wide-angle shooter, and a 5-megapixel camera. The front camera is a 32-megapixel f/2.0 selfie shooter which is able to capture images at high quality.

Additionally, you will get 128GB of onboard storage, a microSD card slot (up to 512GB), and an in-display fingerprint sensor on the Samsung Galaxy A70s.
PublisherWisdom UchePosted atSunday, September 29, 2019 Post a Comment
Labels#64MP, #Phone Specs, #samsung, #Samsung Galaxy A70s, #Triple Camera