Share
Apple iPad Pro will be updated with an 11-inch and 12.9-inch models which will come with the iPhone 11 Pro-style triple-lens cameras. The Apple iPad Pro 2020 will not come with any major design changes rather than the iPhone 11 like camera design. Let's see the review through the image revealed and what to expect. 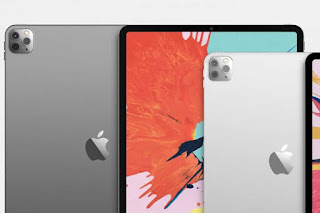 As you can see, the current phone camera is just single with a flash, but the new updated iPad Pro 2020 will feature a triple rear camera with a flash, the phone's design is exactly how the normal iPad Pro is, no change in design, only the updated camera which will be improved.

The new iPad will feature iPhone 11 Pro and iPhone 11 Pro Max Camera Design, you can compare the previous version of the iPad with the upcoming version. It is also possible to rent an iPad in Montreal so you get a cheap and affordable iPad for yourself.

Both models (11-inch and 12.9-inch) will still feature Apple's Face ID for biometric authentication with identical dimensions. We got some details that the phone will be launched in March 2020. Also, the 11-inch will likely have an aluminum back, while the next-generation 12.9-inch iPad Pro may feature a glass back panel based on the leaks. Both models of iPad Pro 2020 might feature rear 3D sensing.

It's Specifications, Price, and features are yet to be revealed, although we know it will not come with any major update other than the camera, so probably no updates in the design and features.
PublisherWisdom UchePosted atSunday, December 29, 2019 Post a Comment
Labels#Apple, #iPad, #iPad Pro