Samsung Galaxy M31s Design and Specifications (Check It Out!)

Share
The upcoming M31s got displayed on Google Play Console listing, it shows the Samsung Galaxy M31s that is an upgrade of the M31 will be coming with the Samsung Exynos 9611 SoC and 6GB of RAM. We also got to see the device screen resolution, GPU, OS version, and the CPU configuration. So here's the Galaxy M31s Specifications and features. 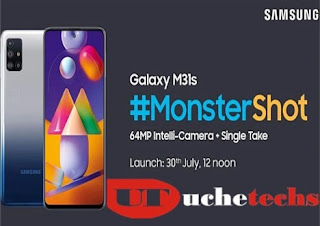 Specs
The device will be launched in India on July 30, also as expected from the M Series starting from M30s, the device has 6,000mAh battery, while the fast charging is 25w. What more should be expected? The device will be powered by the Exynos 9611 SoC (4-Cortex-A73 cores), and it will be clocked at 2.3GHz and four Cortex-A53 cores clocked at 1.7GHz.
The device will be very good for playing games like PUBG, CODm, PES 2020, and can run PPSSPP Games smoothly without settings tweaking. It may come with the Mali G72 GPU clocked at 1050MHz, and 6GB of RAM, while the OS will be Android 10 from box, making the device eligible for Android 12 in the future.
SEE ALSO: Samsung Galaxy M31 With 6,000mAh Battery, Quad Rear Cameras: Specs
The display will feature a 1,080x2,400 pixels display with 420dpi pixel density and will come with the Super AMOLED full-HD+ display.
Heading towards the Camera specs, it will come with a 64-megapixel primary camera (64MP), it still comes with a quad camera like the previous model, but this time, it has a hole-punch design front camera.
When will the device be launched?
The Samsubg Galaxy M31s is expected to launch July 30 at 12pm, this was gotten from the dedicated Amazon page. The device price is yet to be known, as soon as it is shared it will be updated on this post.
Related Post:
PublisherWisdom UchePosted atTuesday, July 21, 2020 Post a Comment
Labels#Tech news