Dark mode for Facebook is finally being rolled out for more Android and iOS devices on the official application. This was confirmed recently by FB on Twitter after the collaboration with reverse engineer Jane Manchun Wong. If you want to activate this cool Facebook Dark Mode, here's how to get it on your device. 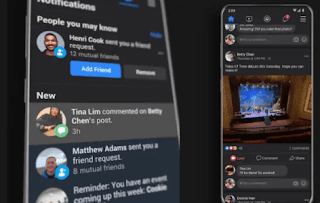 A few months ago, Facebook confirmed this feature, they began rolling it out only to few users, less than 20% got the update, but now it is being rolled out to everyone on the main app. The public testing as said early was finally confirmed by Jane Manchun Wong, this was done on a video collaboration with the company's Alexandru Voica.

SEE ALSO: How to Get Facebook Avatars Cartoon Free

So after a long wait, Facebook now follows its secondary company's Messenger, Instagram, and WhatsApp to get the dark mode feature. There have been some mods of Facebook being used to get this dark mode enabled, so now you can stop using them and get back to the official FB app for Android and iOS users.

In other to enable Facebook Dark Mode, you need to head to the settings menu which can be accessed from the top right of the app, then select Settings & Privacy. So if it has been rolled out to you, you will see the dark mode option, so tap it to enable it on your account. It is still being rolled out to everyone, so you'll need to be patient if it hasn't been enabled on your account.