BAN PAN: PUBG Mobile has permanently banned 1.6M+ accounts in just 5 days, the developer shared this information recently on their social media handler. This latest ban does not have a time limit as the regular done by then, for example, 6 months ban or more, rather this is a permanent ban. Imagine over 1.6 Million accounts banned in the space of 5 days, here is what caused this. 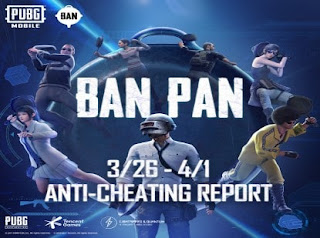 PUBG Mobile banned those accounts for participating in cheating and hacking, they also shared the data of such players banned such as the hack being used, the players rank, and so on. Most of the accounts banned were using auto-aim hacks (locks at the target automatically) which is quite hard to detect when an opponent is skillful or cheating.

Recall PUBG introduced an anti-cheat system around October 2019 which was aimed at reducing or totally getting rid of hackers and cheaters in the game, so fair players get to enjoy the game. Since this was introduced, it made it difficult for hackers to go unnoticed in the game and so they got banned. Now with this new report shared by PUBG Mobile, we can see it has banned 1,691,949 accounts permanently, this was done between March 28th to April 1st.

In the tweet shared by PUBG Mobile, they shared that not only 1.6M accounts were banned, but they also made public the banned data - 35% of banned players were in the Bronze tier, 13% were in Diamond, 12% in Crown, 11% in Silver and Platinum, 9% in Gold, 8% in Ace, and the remaining 1% in Conqueror. 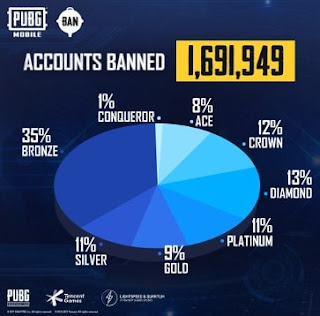 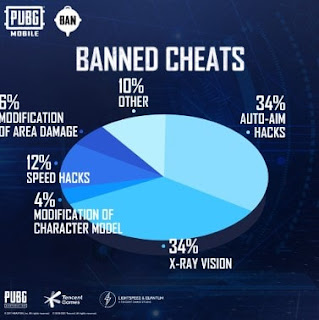 They went further to share the hacks being used, 34% of banned gamers' accounts were using auto-aim and X-Ray vision hacks that allow players to lock on to opponents and spot other players through walls respectively. Speed hacks were also being used by 12% of the accounts, while 6% were using area damage hacks, 4% were modding characters, and the remaining 10% had other kinds.